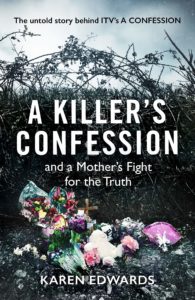 A Killer’s Confession, published by Headline, has been released!  Huge congratulations to Karen Edwards and thanks to our editing team under Fiona Crosby.  It’s a powerful and candid  account from the mother of a murder victim.  A Killer’s Confession follows on from Catching a Serial Killer, by Steve Fulcher, which has been dramatised by Jeff Pope in A Confession, starring Martin Freeman and Imelda Staunton, playing Karen Edwards.